This image was taken whilst trekking in the Annapurna-Dhaulagiri region in Nepal in October-November, 1995. The Annapurna Sanctuary area in central Nepal, outside the town of Pokhara, is the most popular trekking region in Nepal and offers superb mountain scenery, as well as views across terraced farmland at the lower altitudes. The Annapurna circuit itself is fairly well served by tea-houses along the trail, indeed it's possible to hike from one tea-house to the next most of the way around the circuit.

Dhaulagiri at 8197 metres is one of the highest mountains in the region and dominates the horizon in this picture. On the trek I did, we ventured away from the main trail in order to get closer to Dhaulagiri. Trekking through this region really necessitates the use of porters who are quite remarkable in the loads they carry. The camp was set up each afternoon on ridgelines at altitudes up to about 3500 metres where overnight temperatures commonly dropped below freezing.

Each day would typically involve 3 to 6 hours hiking with the main consideration being, not the distance covered, but the change in altitude. The region has numerous deep valleys and canyons between mountain ridges so that a day's hiking could involve alternating steep downhill then steep uphill sections.

This image was taken using a Pentax SF7 35 mm SLR with a 28-80mm zoom lens and Kodak ISO 100 colour negative film. Aperture and shutter speed were not recorded, but I believe would probably be F16 at 1/60th second with the lens at the wider end of its zoom range. The small aperture together with the wide-angle being used to ensure good depth of field. The negative was scanned using the Epson V700 flatbed scanner and Epsonscan software. The image is presented here full-frame with minimal digital enhancement.

When standing in front of an impressive landscape, such as a mountain range like this, it is all too easy to be so captivated by the view that the resulting photographs are disappointing. The wind on your face and the sense of achievement at the end of a day's hiking at altitude is part of the experience but don't translate into the photograph which is, of course, a 2-dimensional representation of only the visual element. It's at times like this, that it pays to pause and carefully consider the compositional possibilities.

In order to give the image a greater sense of depth, it's worth including whatever interesting foreground material may be present, in this case, the rock and timber hut. In this image, I've attempted to give the foreground and background similar weight, with the lines of the roof timbers leading the eye towards the distant mountain. 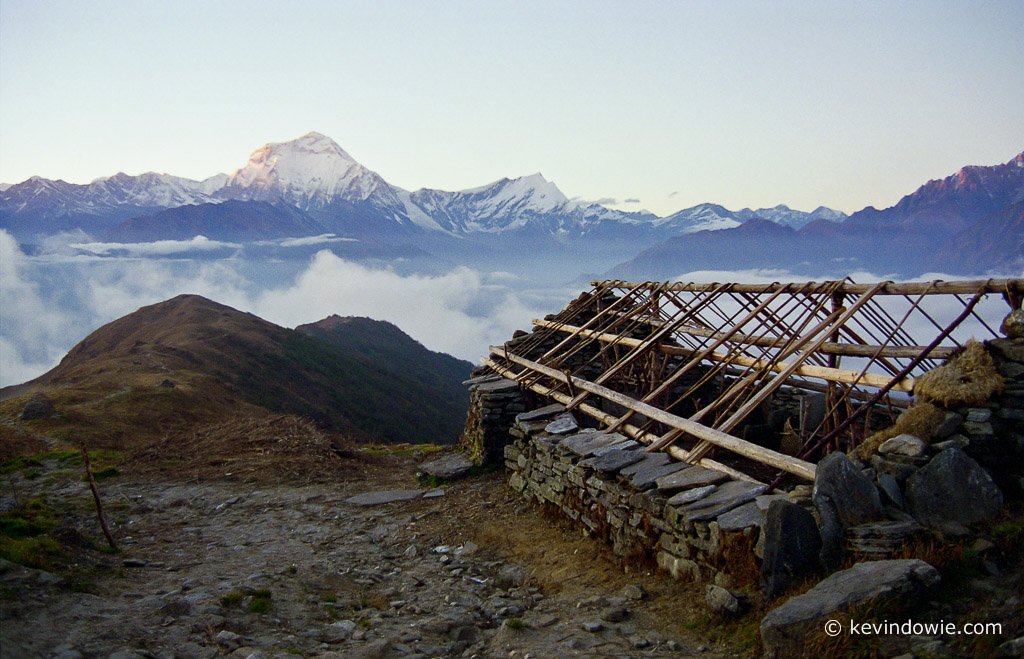