The feathers are flying!

The white-tailed eagle (Haliaeetus albicilla) or white-tailed sea-eagle,  one of the species seen and photographed during my trip to Japan in February,  2016.   The white-tailed is among the largest,  and has the greatest wingspan,  of all the world’s eagle species.    Widely distributed throughout Eurasia,  fortunately, it isn’t considered endangered despite historically being hunted in the mistaken belief that it was a threat to livestock. This pair was photographed at the Akan International Crane Centre in Hokkaido.    The staff at the centre throw fish out on the snow for the eagles who have learnt the right time of day to turn up for the free feed.    In this instance, two eagles went for the same fish with a mid-air tug-of-war sending feathers flying.    The bird with the all white tail is the adult whilst the second bird still has his adolescent plumage,  it takes about 4 or 5 seasons till the full adult plumage is achieved.

The images were taken in burst mode with less than 1 second between the first and third frames.     These images are part of a larger (and still expanding) gallery which I encourage readers to check out:    Winter in Japan

As can be seen from the image gallery,  some changes have been made recently to the website with more changes to come.    As part of the new image gallery/photo archive system,  images are now readily available for licensing.    There will be further developments ahead including the offering of prints for purchase,  more on that at a later date.

I admit to having a love-hate relationship with social media.    Whilst staying in touch with what friends are doing and being alerted to the recent work of photographers whom I know and/or admire is valuable,  there is always the issue of wading through the massive volume of rubbish to get to what’s worthwhile.     I recall reading somewhere that the average Facebook user spends about 50 minutes per day on that system.     It’s an extraordinary amount of time that could obviously be used on more productive activities.   That’s without considering the mind-numbing monster that is Twitter!   (I’m happy to leave that to Donald Trump)

Do we really need to know what Kim Kardashian had for breakfast?  Do we really want to be bombarded with mindless memes?   And then there are the super irritating chain letter postings! As I recently posted on Facebook:

Enough already…..”I know 97% of people won’t care enough about (insert your favorite cause/perceived injustice/cruel disease) to read this to the end”….”copy and paste to your timeline”   I can’t believe the number of, otherwise intelligent, people who pollute the system with this crap, please stop.

So what can be done about it?    Well fortunately there are a couple of applications that are worthy of consideration.     Social Fixer and FB Purity

Neither is perfect,  for example, they don’t currently work on mobile devices as the source of Facebook’s data isn’t available to developers.   However,  on a desktop computer, they can be set up to filter out a great deal of the “fluff”.    One facility (within FB Purity) is a “Custom Text filter” which lets you hide posts in the newsfeed that feature words or phrases that you specify.    In response to the chain letter postings,  the phrases “copy and paste to your timeline”  and  “write ‘done’ in comments when you’re finished”  are now blocked from appearing in my newsfeed. 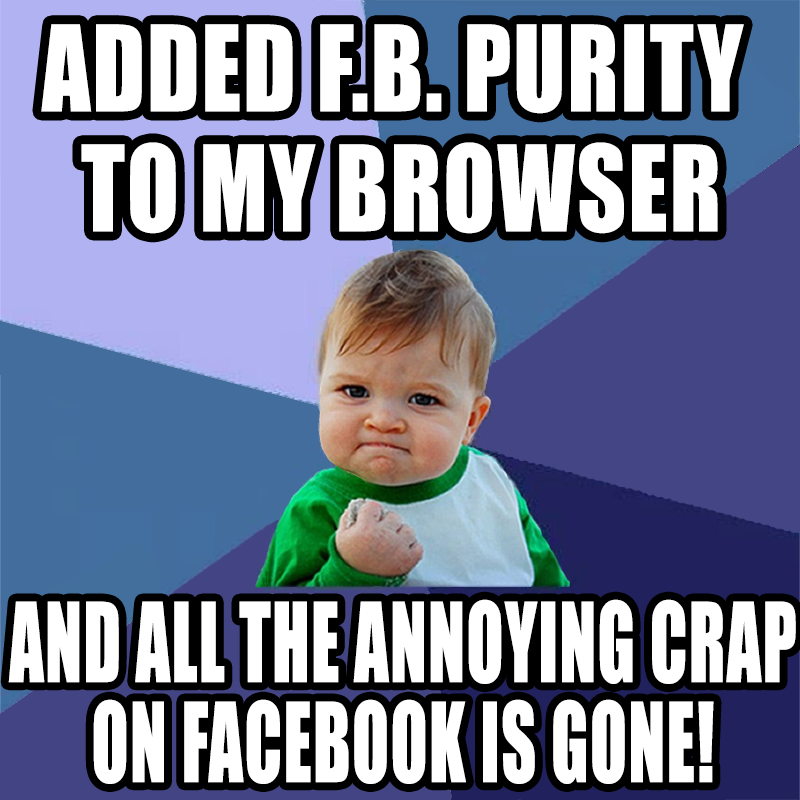 Both applications also limit the number of posts displayed on the page so that you don’t end up scrolling endlessly through material you’ve already seen.    Another strategy that I now employ is to use two different browsers on the computer.  Firefox and Chrome.  I initially installed Chrome simply because one of the applications had been configured to work with that browser whilst there was a technical delay in making it available on Firefox.    I now use the Chrome browser simply as my “Facebook browser” using Firefox for all other internet activities.   This introduces some discipline into my social media use,  I turn on Chrome,  make a mental note of what time I started,  and then see how fast I can check the filtered newsfeed and close the browser.   Typically I can see what I need,  or wish,  to see in about 5 minutes,  10 minutes if I see something I believe I should comment on.     The result,  30-40 minutes of my time saved…..recommended!   🙂  KD