“With its eye-popping moonscapes,  Haleakala’s like no other place in the (US) national park system”   –  Lonely Planet.

Well, they certainly got that right!    I’ve been fortunate enough over the years to visit some pretty extraordinary places and see some amazing landscapes,  but Haleakala exceeded my expectations.     One of the “must-do” things if you visit Maui,  is to get up early and make your way to the highest point on the island for sunrise.    Weather conditions permitting,  the views across the landscape to the neighbouring islands are spectacular and the landscape itself is something to marvel at.

Prepare for an early start

With the alarm clock set for 3 a.m. the recommended layers of clothing on,  camera batteries fully charged,  penlight torch in breast pocket,  some breakfast and drinks in the car,  which I’d fuelled up the night before,  and I was set.   Well prepared I believed,  but I would later regret one oversight!

The drive up the winding road took just over 2 hours and took me from close to sea level to Haleakala Summit at 10,023 feet,  said to be the highest elevation gain in the shortest distance (37 miles by road) in the world.    With the increasing elevation of course comes decreased temperature.    By the time I got to the summit carpark,  which is only a couple of minutes walk from the summit viewing area,  the pre-dawn temperature must have been only just above freezing in addition to which there was,  what felt like,  an almost gale-force wind blowing giving a vicious chill factor.    At the summit, there is an enclosed viewing area with large glass windows which was great for sheltering from the wind but there was no way I was going to take photographs through those windows.   If you want acceptable pictures you’d better be willing to get out in the weather and accept getting cold!

The camera on the tripod,  I framed up my shot prior to the sun actually coming up,  set the shutter to self-timer mode using my torch to confirm my camera settings.    Now it became apparent that my preparations were deficient in one regard.    In all my reading about Haleakala, I’d learnt to expect it to be cold but it hadn’t occurred to me to pack gloves!  Just didn’t think of it.    Visiting Hawaii,  pack the bathers,  pack the shorts,  the tee shirts,  the sunscreen,  cause it’ll be warm and you’ll be spending a fair bit of time at the beach,  right?  No one ever got frostbite in Hawaii surely!

As the wind blew and chilled,  the sky started to colour up with the impending sunrise.    I started taking shots,  hands in pockets to try and retain warmth in my fingers,  taking them out only to press the shutter button to activate the self-timer and then to adjust the camera position for different framings.    As the sun came up it did indeed give a wonderful display,  lighting up the scattered high cloud cover.   My fingers were now so cold that I’d lost all sense of feeling in them.  I was reduced to using the torch to see the shutter button in the low light to see if my finger was on the release as I couldn’t actually feel the button under my finger.

Sunrise from the summit of Haleakala.    At over 10,000 feet elevation there is cloud both below the peak and higher in the sky overhead.    What appears to be a star in the top right corner is almost certainly a planet,  probably Venus.

A short distance from,  but visible from,  the summit is the Science City Observatory.   Administered by the University of Hawaii and also used by the US Department of Defence for satellite tracking,  deep space surveillance….and voice communications with extraterrestrials (OK,  I might have made up that last bit…) the facility is off-limits to the public.     The technology employed there is said to be capable of tracking a basketball-sized object in space up to 22,000 miles away,  pretty amazing (and I didn’t make that bit up).     I’ve made the point before about taking a moment to look away from the main attraction,  particularly when looking at sunrises/sunsets,  and look at what else is on offer.   In this case the full moon in a gradually lightening night sky over the observatory which is starting to pick up some warming light from the rising sun off to camera left.

Perseverance,  preparation,  and the blessing of great conditions.   A sunrise to savour,   cold fingers notwithstanding.

One of my personal favourite images from the morning and indeed from the whole trip.   Looking south-east from the summit,  conditions were so good that the Big Island of Hawaii was visible beyond the low lying clouds and sea.    The two peaks visible are the volcanoes of Mauna Kea on the left and Mauna Loa on the right.

Leaving the summit and winding back down the road,  there are a couple of notable viewpoints where you can stop and take in the landscape.    The contrast in this scene was extreme meaning that a composite of bracketed shots was required.   The vegetation is sparse at this altitude and the wind was howling,  only the hardiest of plants survive here.

The floor of Haleakala Crater viewed from Kalahaku Overlook.    700 feet below the summit,  the Kalahaku Overlook offers a wonderful view over the crater floor.    This image shows only a small section of the total vista and shows some of the volcanic cinder cones.     I was using a couple of different lenses on the morning,  the 24-105mm zoom and the 16-35mm zoom.  Even at 16mm I couldn’t cover the whole scene in front of me it was so broad.    Once again contrast was an issue,  particularly where both the brightly lit sky and the dark volcanic rock of the foreground were included.   I resorted to panning and bracketing shots with a view to doing a stitched panoramic (see below).

As I said earlier,  this was quite a landscape.   I recall standing for an extended time here just taking in the scene and thinking to myself that it was one of the most remarkable landscapes I’d ever seen.    Although the sun was now up,  the wind was still blowing a chilling gale and the feeling was only slowly returning to my fingers.    From this vantage point, I think I counted 11 cinder cones in total,  a landscape that could well pass for an alien planet.

Once again,  huge contrast issues to deal with,  cinder cones,  clouds,  and in the distance the twin volcanic peaks of the Big Island.     The landscape is a result of the forces of both volcanic activity and erosion.

A combination of clouds and wind meant that the scene was changing rapidly,  here viewed from Leleiwi Overlook (elevation 8840 feet).   There was something rather mystical about the movement of the clouds,  creeping over the lava fields.

Haleakala National Park, a 6 frame stitched panorama.   A scene so vast that the wide-angle lens couldn’t get it all in one frame.  An other-worldly location! 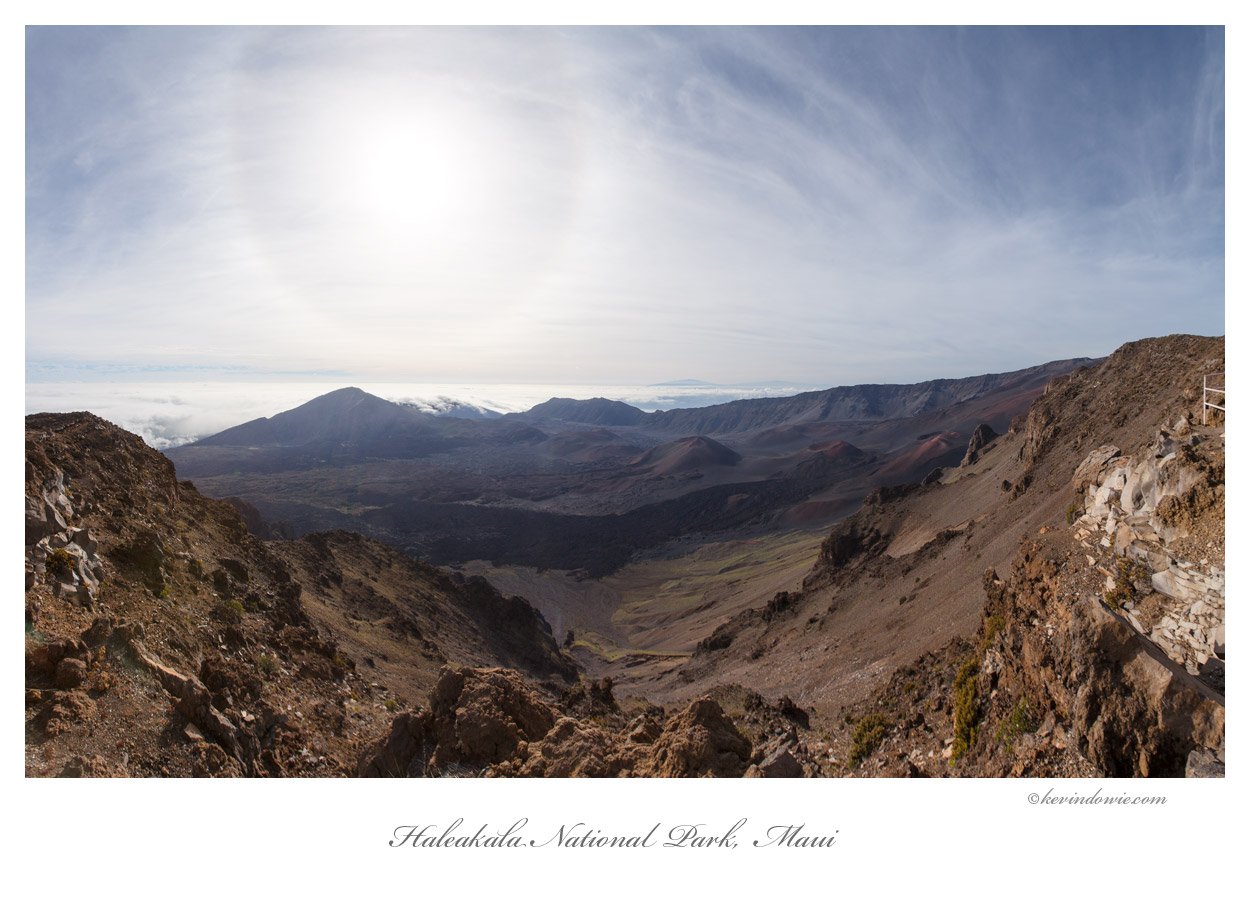 In conclusion,  if you get to visit Maui,  you must give yourself at least one day to check out this extraordinary place.    The sunrise viewing requires some planning and preparation,  be prepared for the cold given the altitude and the cutting wind conditions which can be expected there.   Plenty of layers of clothing, a woolly hat that covers your ears,  GLOVES,  torch,  food and drink and a full tank of fuel as you can’t get supplies of any kind in the park itself.     Oh, and did I mention GLOVES?   Learn from my mistake!

PS:     No bodily parts were actually lost during this adventure,  although at the time it felt like a real possibility.     🙂    ~KD.