Excuse me as I revisit some of my photographs from the March, 2007, trip through Egypt and Jordan when I was fortunate enough to travel through Wadi Rum.

Wadi Rum in Southern Jordan is a desert region of sandy valleys and dramatic sandstone and granite mountains some over 1700 metres in height. Covering an area of 720 square kilometres, there has been human habitation here for thousands of years, UNESCO recognizing its cultural significance by adding it to the World Heritage List.

The location has also been the setting for several movies notably David Lean’s “Lawrence of Arabia” filmed in 1962. Lawrence achieved fame during World War One by helping to organize and lead an Arab revolt against the Turkish army. There are numerous references to Wadi Rum in the movie and in Lawrence’s book “The Seven Pillars of Wisdom”. There are several locations within Wadi Rum that make reference to Lawrence but whether he had any actual attachment or involvement to those specific places isn’t really clear.

One of the things you can do is stay overnight in a Bedouin tented camp in the desert which I did. Access into the area is by four wheel drive vehicle. The image presented here shows the ‘road into one of these camps and obviously required me climbing up one of the high sand dunes to get it. 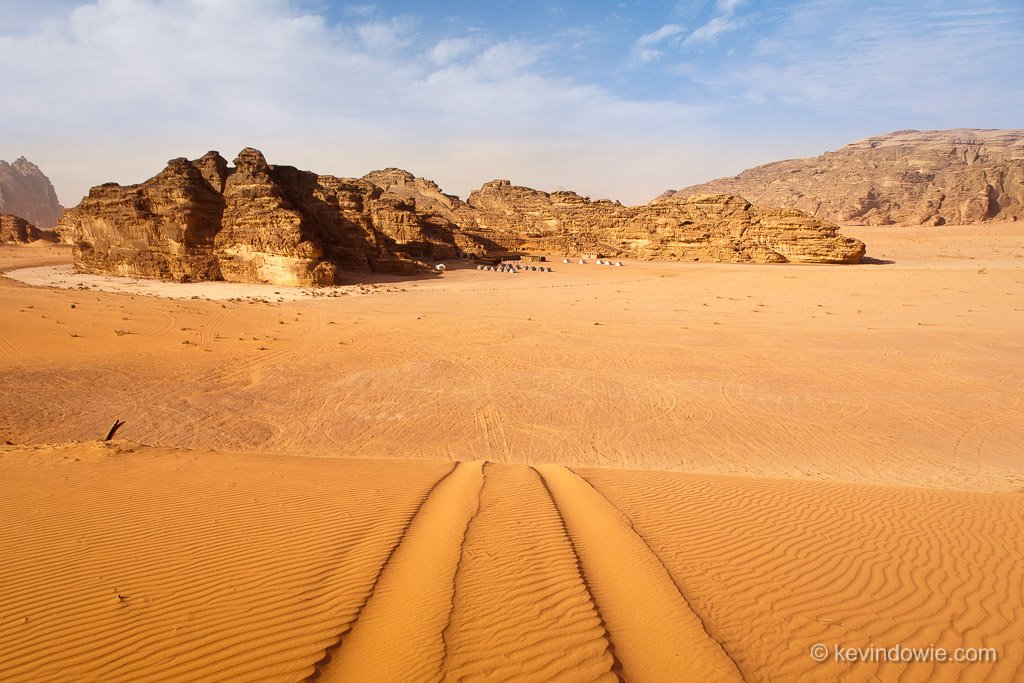 A camel stands in the spectacular landscape of Wadi Rum, Jordan. Also known as the Valley of the Moon, Wadi Rum is a spectacular region in southern Jordan where a sandy valley lies between granite and sandstone rock formations. I got this photograph late in the afternoon by climbing to the top of a sand dune nearby to a tented camp where we were staying that night. The scene itself was great but made even better when a camel thoughtfully positioned itself one third of the way into my frame aiding the composition of the image! 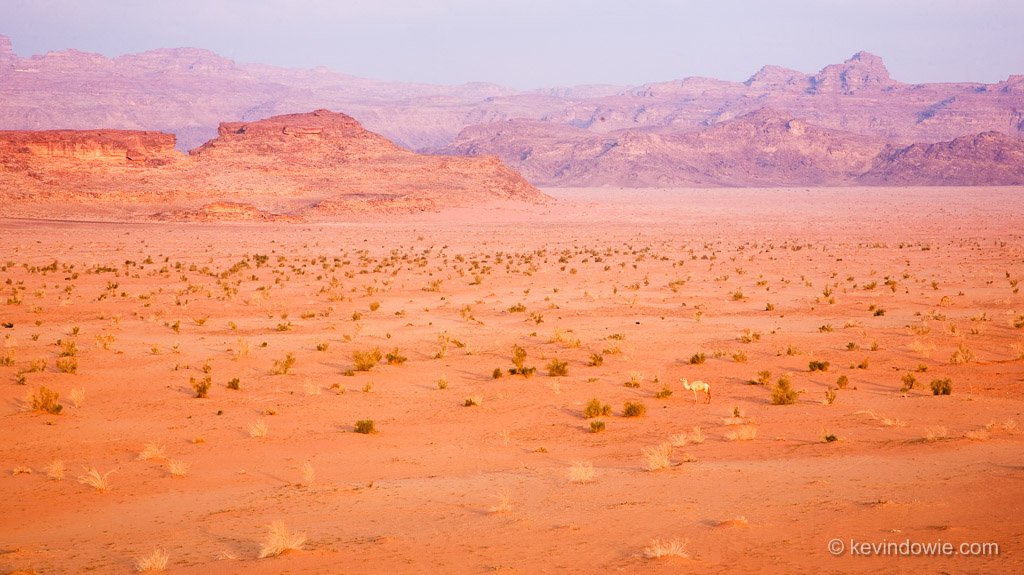 The importance of a good foreground in landscapes.

Late afternoon in Wadi Rum, Jordan and I climbed to the top of a rock outcrop to survey the scene. The sandy floor of the valley with its sparse vegetation and the mountains in the background looked good but I wanted something of interest in the foreground as well. The outcrop I was standing on filled the bottom of the frame nicely but demanded a narrow aperture to give sufficient depth of field to get it all in focus.

I recall reading the advice of a respected landscape photographer many years ago in which he preached the value of finding some interesting foreground detail to include in landscape photographs. It was a lesson worth recalling (particularly when using wide-angle lenses). Trying placing your hand over the lower third of this image and I think you’ll agree it's a nice scene but just lacking something, a bit flat. With the foreground included, the image takes on a more three-dimensional quality, a quality always worth searching for! A sturdy tripod meant the slow shutter speed wasn’t a problem. 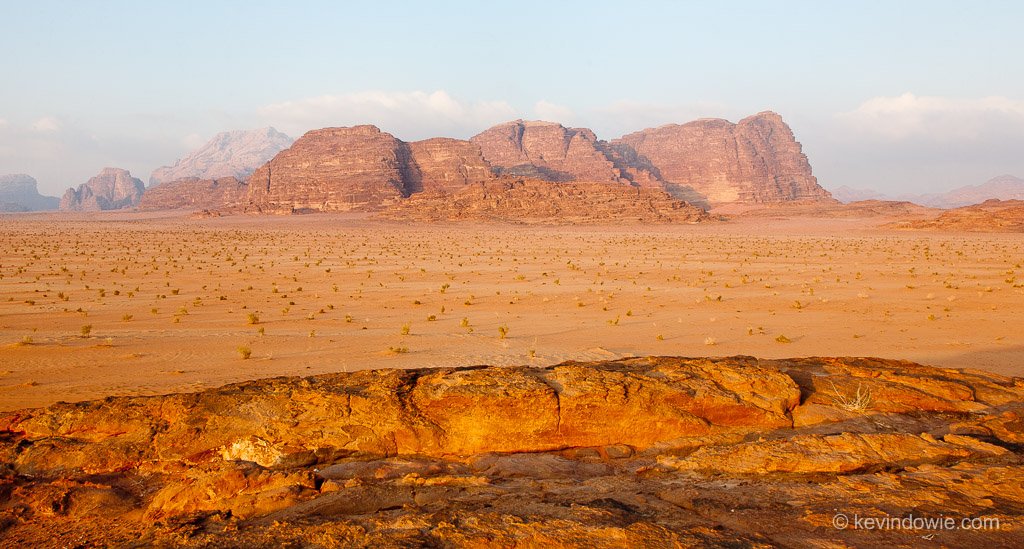 Hardy vegetation surviving in the desert sand, a harsh environment indeed. Reviewing the image now, I’m struck by what a strong compositional element that white rock in the right foreground is. If it were a piece of rubbish, a discarded bottle or can, I might have been tempted to remove it by cloning. However given that it is a natural part of the scene, I’m happy to leave it in place. 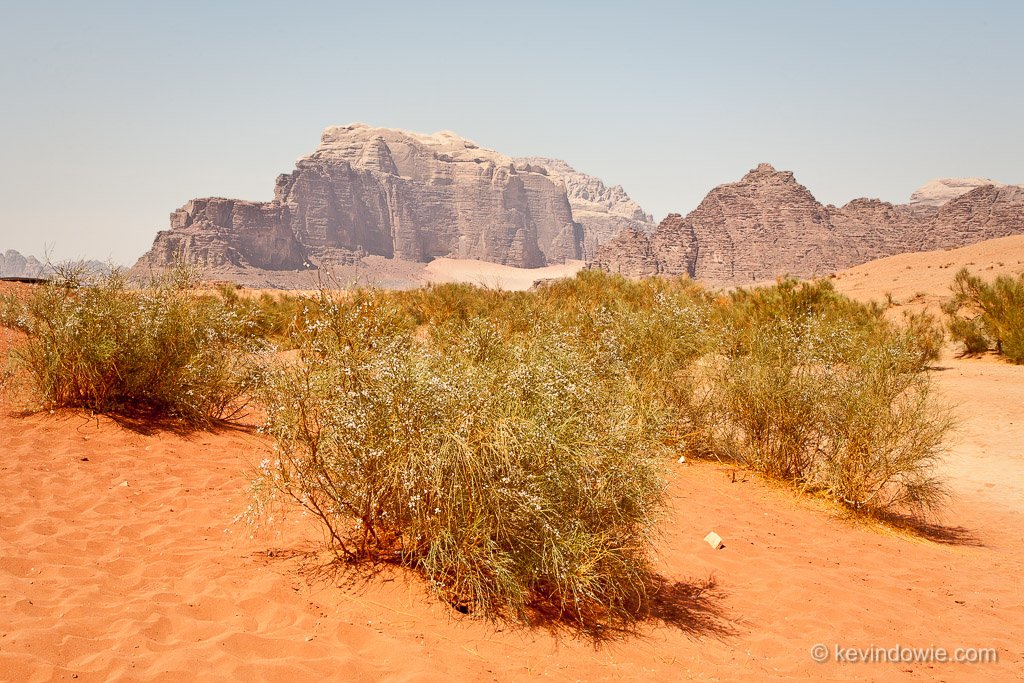