Since 1991, a pair of Peregrine Falcons has been observed in a nest on the rooftop of the 33 level office tower at 367 Collins Street the only known peregrine falcon nesting site within Melbourne's Central Business District.

Public interest in Melbourne's high flying residents led to the installation of a CCTV with a live internet stream and a purpose-designed nesting box/platform. The current breeding pair recently hatched three chicks, a welcome distraction for the people of Melbourne who've been going a little stir crazy with COVID 19 related lockdowns and travel restrictions. 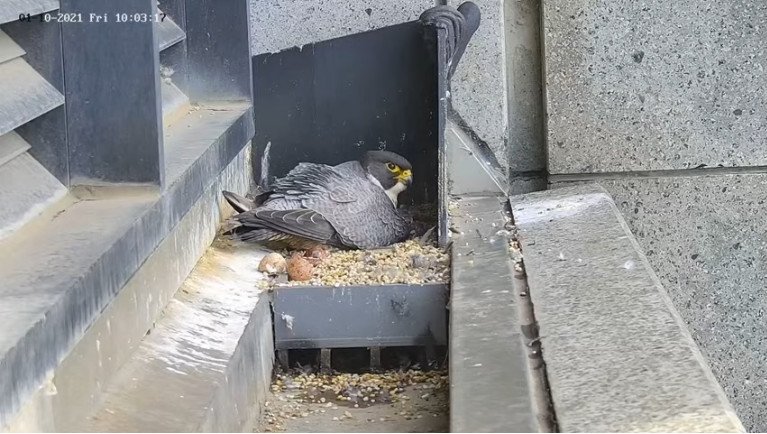 Melbourne's CBD Falcons nesting. Link on the image to access the live stream.

Peregrine Falcons are birds of prey known for their capability to fly at extremely high speeds (in excess of 300km per hour) earning them the title of the fastest animal on earth.

Like many species, there are always arguments over classifications, however, it's currently accepted that there are 19 subspecies of Peregrines with the Australian Peregrine Falcon (Falco peregrinus macropus), being found across the continent except in the southwest. Like most of the subspecies, it is non-migratory. Particularly territorial during the breeding season, the Falcons have a ready food supply with the city's pigeon population.

It is typically the female that chooses the nesting location favouring ledges in cliff faces with an overhang. In the urban environment, tall structures such as office towers and bridges are good substitutes this behaviour being observed worldwide. A Falcon pair generally mate for life and may use the same nesting location for many years.

The sounds of the City

As a postscript, it's interesting with the live feed to hear the sounds of the city below. The rattle of trains on railway tracks, the occasional "ding" of Melbourne's iconic trams, every now and then the siren of an emergency vehicle. The metallic buckling sound early in the day as the rising sun heats and causes metal surfaces to flex, the gurgling of rainwater going down drainage pipes. ~KD.

Update: 7th October, 2021: It was reported a couple of days ago that there 2 chicks hatched and a third egg unhatched. As of this afternoon, there are four surviving chicks visible on the nest. Click on the photograph above to go to the live cam.