Today’s image comes from my trip to Nepal earlier this year.   I was there taking part in a photo workshop being run by respected pro photographers Gavin Gough and Jack Kurtz and timed to coincide with the Holi festival.   Most of our efforts were concentrated in the Kathmandu Valley where we found the people to be welcoming.    Whilst the colourful and sometimes manic festival was the focal point of the trip,  there were numerous other opportunities to interact with and photograph the people.

This image is part of my Nepal photo gallery which is growing as we speak!  🙂

The image was taken a short distance away from a well-visited tourist site in Kathmandu,  the exact location I shall keep to myself.   I encountered a small courtyard off which was a small building/shrine.   Beyond the simple entrance were two rooms, the small room shown here next to the entrance and a larger,  even darker,  room beyond.  I heard some chanting coming from the darkness but didn’t proceed,  maybe I should have.  If my low light vision were a bit better I may have been able to see where I was walking!

The actual role played by this young man is unclear to me but I imagine him as a novice in the care of or tending to,  a more senior figure or holy man.   The unseen source of the mysterious chanting?

I paused and watched quietly as the youth went about his duties.   The sense I had of him was of a gentle,  shy individual.    Sadly,  I speak little to no Nepalese and in any event,  the circumstances didn’t feel conducive to engaging him in conversation and distracting him as he went about his tasks.

The setting with its shapes, lines, textures of timber, wire mesh, and rusted fittings.   The doorway with its crooked angles and ill-fitting door and the barefooted young man himself with his shawl wrapped around him had obvious photographic potential.   I set my camera values.   The low light conditions dictated a high ISO,  the widest aperture available, and even then a desperately slow shutter speed.    I knew I wanted a vertical format image and would use the lower-left corner of the door jamb,  the only true right angle in the whole structure,  as a framing reference.   The shot would rely on a steady handheld technique,  Image stabilization technology, and an ounce or two of luck.

After observing him for a minute or so,  he looked up and made eye contact.  I quietly gestured toward my camera, he gave a nod of approval and stood still for a moment,  not more than a second,  as I raised the camera and took the photo.   I nodded and smiled my appreciation and he continued with his chores.    Not a word was exchanged between us,  a silent and brief collaboration. 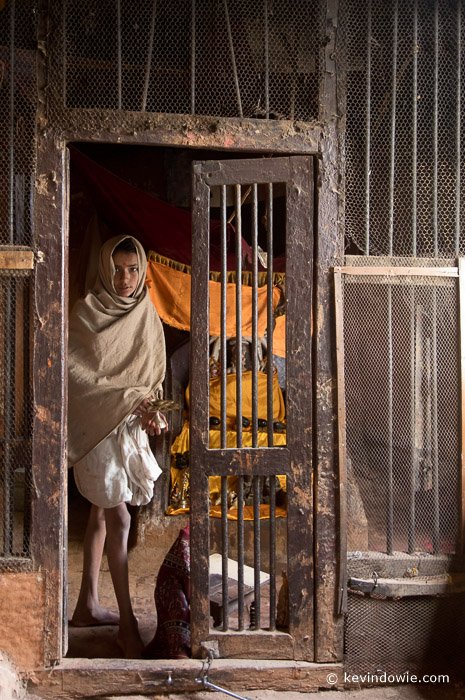 On reviewing the image,  I could hardly be more pleased with the result.   Given the circumstances,  it is from a technical point of view,  as good as I had hoped for and better than I should have expected!    As an environmental portrait,  I find it one of the most satisfying images I’ve taken to date.    ~KD.