History of the Pyramids.

I won't go on at length about the history of the pyramids as there is a wealth of information elsewhere for those that are interested. They were commenced over 5 and a half thousand years ago as burial tombs for the Pharaohs who were considered living gods. Some of the pyramids, such as the Great Pyramid of Khufu (also known as the Pyramid of Cheops), are each believed to have been built over a period of about 20 years and would have required a workforce of as many as 200,000 people. It was long believed that the pyramids were built by slaves however historians now think this unlikely.

What is visible today is the underlying, structural stones of the pyramids, originally they were covered by white "casing stones of highly polished white limestone". In their day, the pyramids would have been dazzling in the desert sun.

The ravages of time

The Pyramids have over the many centuries been looted, damaged by earthquakes and partly dismantled with materials being taken and used on the construction of other buildings and monuments. Although still impressive, the structures would originally have been 7 or 8 metres taller than what we see today post erosion and pilfering. Also of note is that in ancient times the River Nile would have flowed quite close to Giza and the Pyramids. Over the thousands of years, the course of the river has changed. 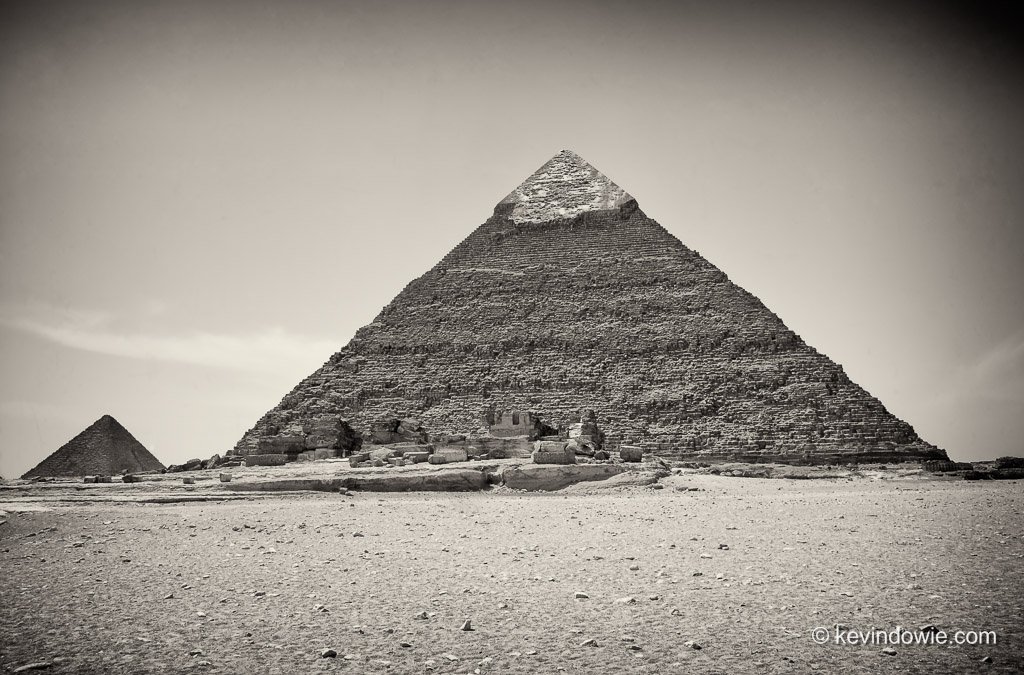 As part of my journey through Egypt and Jordan, I did of course get to Giza to see the famous great pyramids.

One of the challenges in photographing the pyramids today is that you are competing with hundreds of other tourists who are milling around the monuments making it almost impossible to get an image without people in it. There are a couple of approaches that you can take and I guess it comes down to how you wish to depict the scene. You can of course accept that there are people everywhere and that gives a true representation of the scene as it is today. The pyramids as a popular site with tourists. However, that isn't how I wished to proceed!

I'm a keen student of the history of photography and admire the photographs taken in the 19th century by such figures as Roger Fenton and John Thomson. Fenton became famous by photographing the battlefields of the Crimean War in the 1850s, whilst Thomson was one of the early European visitors to the far east, China and Thailand (Siam as it was known then). The cameras of that time were cumbersome, slow to operate and of course, it was well before the advent of colour materials. Their images are monochrome, often sepia or brown toned and any movement at all is rendered as a blur. I wished to present today's image as a sepia-toned monochrome without people present and suggestive of the antiquity of the location.

The image is in fact a composite of 5 separate frames each of which had people visible. Layering the frames in Photoshop enabled me to mask out the people in the individual frames to show only the scene itself. Compiling the individual shots was not a matter of serendipity but planning. Unfortunately, there are restrictions placed on the use of tripods within this historic reserve and so all the shots were taken handheld. Camera settings were all on manual so no automated changing of apertures, etc, during capture, and I maintained consistent framing of the scene by sighting specific items within the scene and then lining them up in the viewfinder with specific focus points in the viewfinder display.

After aligning the frames and masking out unwanted elements, the earlier version of this image was converted to black and white and then toned using Lightroom. In this updated version, post alignment and masking, the image was taken into Silver Efex Pro for the black and white conversion and toning.